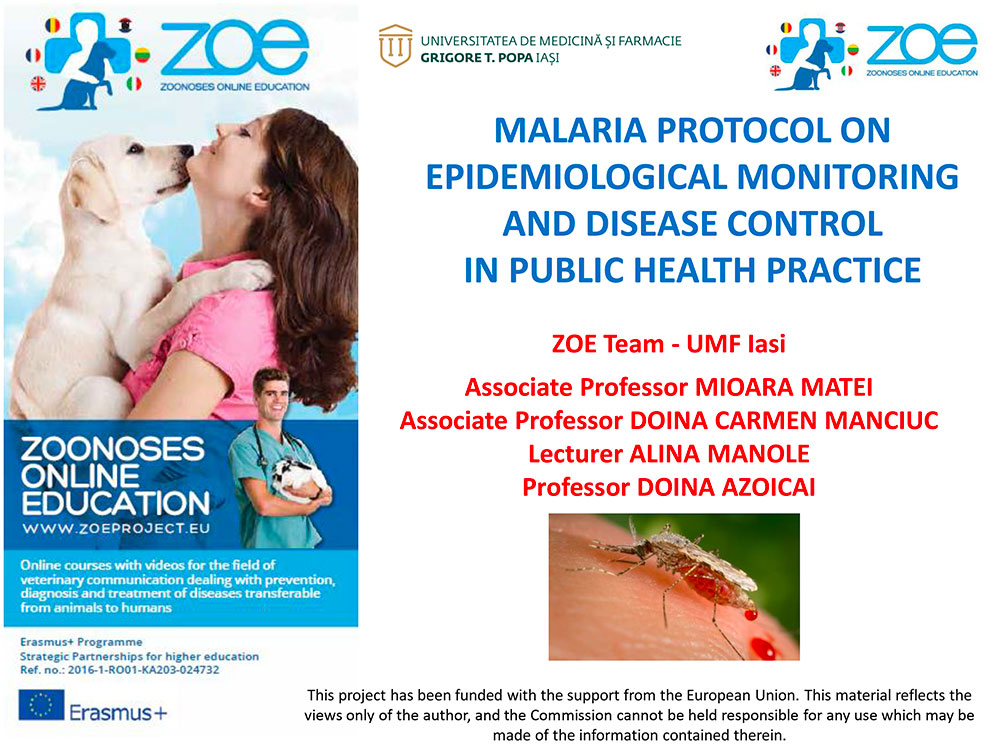 Presentation available in Italian also
Malaria is a serious disease with endemic manifestation in the tropical regions (sub-Saharan Africa, Central and South America, India and parts of Oceania and Southeast Asia), but which may occur in some temperate areas in the form of sporadic cases (import cases). In Romania, the natural transmission of the disease has been interrupted since 1961, and after 1963 the country has been in the phase of the maintenance of malaria eradication. Over the past 10 years, there has been an upward trend in the number of cases of malaria as a consequence of the increased mobility of people globally and of lack of knowledge, or ignorance by travelers of nonspecific measures of general prevention (individual mechanical protection against mosquitoes) and of special prevention (chemoprophylaxis).
During the period 2006-2016, 295 cases were reported, all of them being import cases (16 cases in 2006, 23 cases in 2007, 13 cases in 2008, 12 cases in 2009, 19 cases in 2010, 40 cases in 2011, 32 cases in 2012, 43 cases in 2013, 47 cases in 2014, 30 cases in 2015 and 20 cases in 2016). For the most cases, the infection occurred on the African continent, Plasmodium falciparum being the most frequently involved. The purpose of the trip in the endemic areas was a professional one, but malaria cases among tourists, people employed as military staff, or persons from endemic countries coming to study in Romania were also identified. Most patients have not taken any preventive measures before travelling.
In order to prevent deaths, to reduce the number of illnesses, to maintain the country status "territory where malaria was eradicated" and prevent the re-establishment of malaria in the region it is necessary to improve the epidemiological surveillance system at the national level with the involvement and cooperation of both preventive and clinical services as well as the intensification of pre-exposure preventive measures. In the same time, the surveillance system of vectors populations should be maintained and improved, considering the existence of some factors (the presence of the Anopheles mosquitos’ populations, the global warming phenomenon, and the increasing of mosquitos’ resistance to insecticides) which can reintroduce malaria as an endemic disease in Europe, including in Romania, without an adequate control. Read more ...